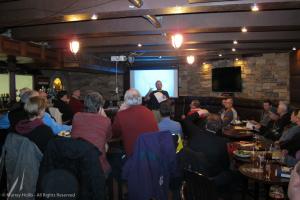 The Ottawa Chapter hosted guest speaker, and local photographer, Louis Helbig at this month’s meeting. It was open to the public.

Thirty-eight people attended Louis’ presentation called “Sunken Villages”. It is an artist’s photographic display of the story of the “Lost Villages” that were permanently submerged during the construction of the St. Lawrence Seaway in the 1950’s. Using stunning aerial photographs, he has been able to collect oral histories from the former residents and descendants of those affected by what was the largest engineering project done at that time. Louis was able to weave this into a interesting narrative for those in attendance.