The George A. Marsh is located off Amherst Island and is only accessible by boat. To dive the Marsh, travel to Kingston, Ontario and go to Portsmouth Harbour. There are several dive charters which will take divers out to the site. In case you have a boat, leave from Portsmouth Harbour and head for Simcoe Island’s four mile point. From here head toward 9 mile point, aim for a point approximately 0.5 nm North of 9 mile point. When abeam, look back towards Old Fort Henry. Line up the water tower behind F. Henry with 4 mile point of Simcoe Island. You will find an orange marker 1.5 nm out. (for the Comet). Continue another nm. and you will find the coloured marker buoy for the Marsh.

The George A. Marsh was a three masted schooner, which was launched in Muskegon, Michigan in 1882. It was used in the lumber trade until it was sold to Mr. J.J.B. Fint from Belleville, Ontario in 1914. The Marsh was then used to carry coal under the command of Captain J.W. Smith. On August 8, 1917 the Marsh sank during a summer gale, killing twelve of the fourteen men, women and children on board. One of the deck hands and the Captain’s brother survived. The tragedy was that seven children between the ages of one and thirteen perished n the disaster. The Marsh today is a fully intact wreck which is a tribute to what can be accomplished if divers respect our marine heritage. 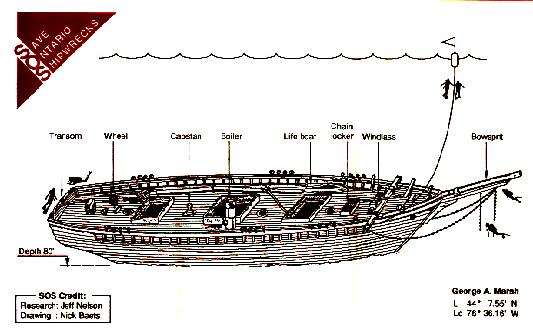