The wreck of the S.S. Keystorm is located in the St. Lawrence River in U.S. waters, 1 mile Northwest of Oak Island and can be reached by boat. Charters are recommended from either Browns Bay Provincial Park dock (near Mallorytown, Ontario on the 1000 Islands Parkway on Canadian side approximately 3 nautical miles Northwest of site) or from Brockville Marinas. The site is at N 44 25.8′ Latitude, W 75 49.3′ Longitude. A mooring buoy of coloured jugs is usually present. Parks, camping sites, motels are available in the Mallorytown area. Ref. Canadian Hydrographical Services chart #1418.

The S.S. Keystorm was built in Great Britain in 1909-1910 for the Keystorm Transportation Co. in Montreal. She was a cargo steamer, 258 feet long with a 42.5 foot beam and a displacement of 2300 ton. She had two boilers and a triple expansion steam engine with 16″, 26″, and 44″ diameter cylinders X 36″ stroke placed aft. The after house contained the galley, crew’s men, dining room and quarters for chief, oilers, firemen and second engineer. The rest of the crew including the captain’s cabin were in the forward quarters. The pilot house was arranged particularly for canal service.

On October 12, 1912 while bound from Ashlabula, Ohio to Montreal with a load of coal, she struck Scow Island shoal in fog near Alexandria Bay N.Y. The pumps were put in operation immediately but it became evident that the ship was doomed. Five hours later the Keystorm sank stern first and rolled over onto her starboard side going down. While her cargo of coal was salvaged, several attempts to raise the ship using steel pontoons failed. Formal hearings and investigation revealed that both Master and Mate were negligent in navigation and command of the vessel causing its loss. 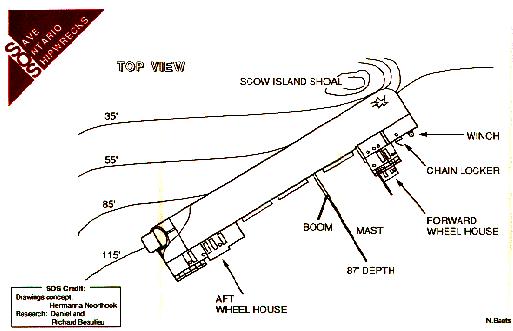