The Rothesay, is located in the St. Lawrence River, west of Prescott. It is accessible both by land and by boat. Follow Highway 401 and take the Highway 18 Exit (#716) to Prescott. Turn west on King St. W (Highway 2) and follow for 1.75 Km until you reach Riverview Heights. There you will see a Historic Marker along the south side of the road commemorating Justus Sherwood. The adjoining grass strip can accommodate about a dozen cars. From the embankment you will see a buoy approximately 300 ft out, marking the actual wreck and a jug closer in that is the beginning of the line.

The Rothesay is a 19th Century wooden side wheeler (193′ x 28.8′ x 7.9′) and was launched in St. John, N.B. on Feb. 2, 1868. Initially she sailed between Fredricton and St. John but was later relocated to serve on the St. Lawrence River. She was carrying passengers between Brockville and Montreal when, on Sept. 12, 1889, she collided with the tug Myra and sank at her present location. Although no-one was lost from the Rothesay two crewmen on the tug were killed. In 1901 members of the Royal Military College in Kingston blew up the wreck amidships in a munitions exercise. The Rothesay was rediscovered on Sept. 25, 1964 by the Underwater Society of Ottawa and remains a very popular dive site. 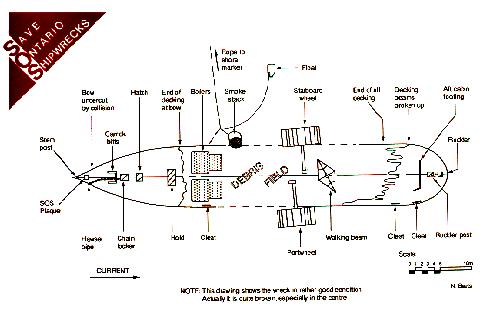