The Waome was built in Gravenhurst ship building yard. Launched in 1912 with the name MINK painted on her bow. A wooden steamer, steel framed, being 78′ long at the keel, 14′ across her beam and displacing 60 tons. She successfully worked until around the fall of 1925 when she was tied up for a couple of seasons. In June 1927 the MINK was sold to the Navigation Co. who overhauled her and closed in her upper deck to create a lounge for passenger service. She was launched with the new name Waome (an Ojibwa Indian word meaning Water Lily) which stayed with her until today. In her 22 years of steaming around the Muskoka Lakes it has been said she suffered a few bumps and bruises on rocks and docks but none as fateful as the morning of 6 October 1934, when on route from Port Carling to Beaumaris a freak wind caught her broadside, leaving her on the bottom just west of Keewaydin Island. Of the six crewmen and one passenger on board at the time four crewmen were able to swim to Keewaydin Island and were rescued. The other three perished with the Waome.

The Waome is located in Lake Muskoka, a few hundred yards southwest of the north end of Keewaydin Island (one of the Seven Sisters Islands) and is accessible only by boat. Follow Highway 11 to Highway 118, turn west to Bracebridge, use bypass and continue approximately 13 km to Beaumaris Rd. Turn left, go to Milford Bay Road, then turn right to Milford Bay Government Dock. The wreck’s location is approximately N 45 04.09′ W 79 31.55′ on Chart 6021. 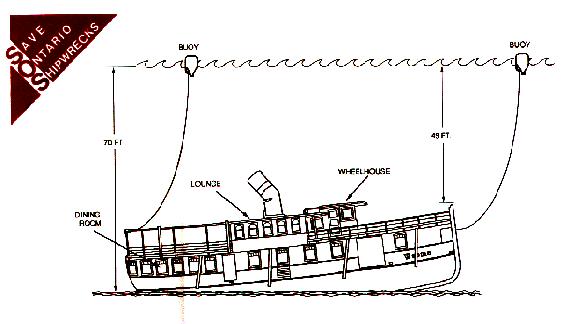 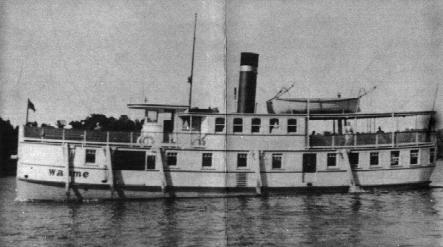