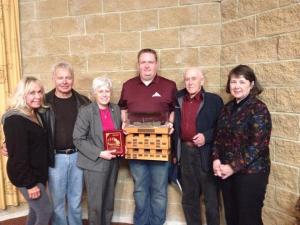 In early November of 1913, a storm, unlike any seen before, ravaged the Great Lakes. The destruction and loss of life was unparalleled, and the White Hurricane, the Great Storm of 1913, would go down as one of the darkest moments in the history of this region.

One hundred years later, a dedicated group of historians, sailors, and community leaders came together with the goal of commemorating The Storm, and remembering and paying respects to all those whose lives were lost or forever changed in those few terrible days.

What they achieved was nothing short of astounding. More than three months of events immersed local and international visitors in the marine heritage of Ontario and the Great Lakes.

*Books, plays, music, and art were produced to share the stories of the Great Storm and make them interesting and accessible to wide audiences.

*A huge job fair and trade show was held here in Goderich to showcase local history and marine heritage alongside modern lives and careers on the Great Lakes.

*Memorial services were held in honour of the lost sailors and ships, with the participation of over 50 descendants of the sailors who lost their lives in the Storm. A number of plaques and commemorative markers were installed or refurbished to mark the 100th anniversary of the tragedy, including the plaque listing the victims of the Wexford shipwreck, which will be installed on the wreck with the memorial wreath later this season.

It is hard to sum up all the work that went into the organization, planning, and execution of this ambitious project, but the end result was an incredible boost to the promotion of Ontario’s marine heritage.

For this work SOS presented the Save Ontario Shipwrecks Marine Heritage Award to the Great Lakes Storm of 1913 Remembrance Committee: