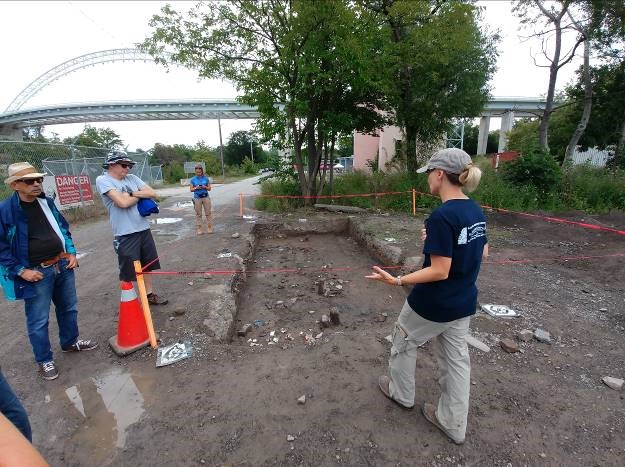 This weekend I was able to observe a land-based archaeological event. A research team led by Brock University archaeologist and maritime historian Dr. Kimberly Monk (and former SOS Toronto member) aims to uncover an abandoned shipyard built by a Maltese immigrant in the 19th century, along with workers’ cottages and even the hull of a ship.

Monk’s project will see a team of archaeologists, historians, geographers and geophysicists from three Ontario universities and their students excavating and documenting the Shickluna Shipyard, which operated from 1838 to 1891 along St. Catharines’ Twelve Mile Creek.

The researchers will be using cutting-edge 3D scanning and digital technologies in their investigations.

“Shipyards form an important part of the maritime landscape but opportunities to study them are rare,” says Monk, Professor of History.

“The location and extended use of this site will provide an unmatched opportunity to investigate how the shipbuilding industry shaped the social and economic culture of Niagara.”

Along the winding river that cuts through the heart of St. Catharines lie keys to the Garden City’s maritime past, relics of a glorious industrial era still evident today. 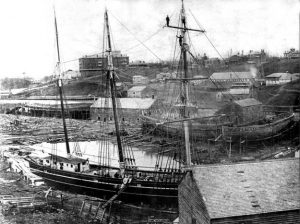 The Shickluna Shipyard operated from 1838 to 1891 along St. Catharines’ Twelve Mile Creek. The shipyard is pictured in 1864.

Due to several factors including the digging of “Mr. Merritt’s ditch” (which was the 3rd Welland Canal), the building technology from wood to metal, and the increased size of the canal runner boats that could not travel up canal 2, the shipyard ran into disuse.

Mr. Shickluna allowed the land to be used for fill, covering up the shipyard. This was a benefit as it protected the site. When the Fire Training building was being erected, they found artifacts, but there was no context to the finds. A later request to expand the Fire Training Building was blocked due to the heritage value of the site. 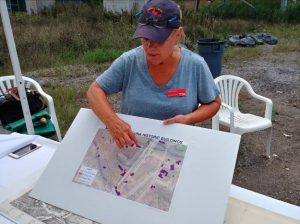 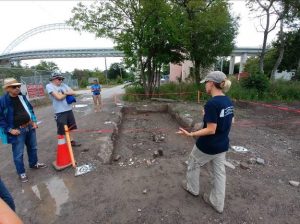 The team was able to use multiple historical maps and overlay them to determine if there was overlapping accuracy. This led them to pick the desired dig locations.

Here, Dr. Monk explains to us the dig site being the outside wall of one of the larger buildings where they were able to discover building timbers, pottery, and a leather shoe.  They were able to identify the pottery coming from Europe, documenting the lifestyles at that time.  The leather shoe was able to weather the ravages of time and the environment due to the high clay content that protected it.

An overhead photograph of the area shows what appears to be a shadow of the submerged ship in the shipyard area.