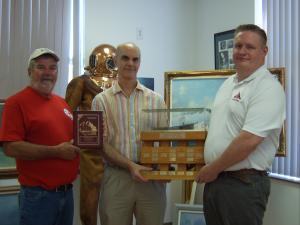 The Save Ontario Shipwrecks Marine Heritage Award was presented to 2012 recipient, Peter Rindlisbacher for his 25 years of contribution to public appreciation of Ontario’s marine heritage.

Peter is a renowned artist, capturing on canvas, scenes of marine disaster, ships as they rest on the bottom as well as majestically plying the great lakes in full sail or engaged in battle.

You can see many examples of Peter’s work here.

The award with plaques for each of the recipients will remain on display at the Erie Quest Museum until the 2013 AGM in Port Dover, ON.