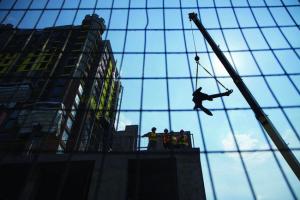 Article in the Brockville Recorder and Times about the lowering of the anchor recovered by SOS 1000 Islands (under license of course) and the work done by students to clean and treat it to stop the corrosion process.

In a recent public meeting that included a section by section exihbit presentation, the MDC )Marine Discovery Center) will not be called the AquaTarium.

This venue will have a dive tank and meeting space for events and classes. Currently the cement structure is basically complete. It is due to open in 2013.

The complete article can be found here…
Link: http://www.recorder.ca/2012/06/12/anchors-away-for-mdc

BROCKVILLE – An anchor that has quite a unique history has come to its final resting place.
On Monday, a crane lifted the 1700-lb. anchor onto the third floor of the Maritime Discovery Centre (MDC) on Broad Street as a handful of Thousand Islands Secondary School students watched its descent.
For the students, watching the anchor get lowered was a capstone of a project the has been ongoing for the school year.
The anchor, thought to be from the 1930s, was restored by art, chemistry, and media classes at TISS.
“It was a blast for the students, but what’s most important is how unique the situation is,” said Dave Sheridan, a long-time art teacher at TISS.
The anchor first came into the public eye about 10 years ago, when a man was caught trying to steal it and another anchor out of the Brockville Narrows with a backhoe.
The anchors came to rest on the outside wall of Blockhouse Island, until Sheridan removed one in October of last year.
“I thought, hey, how cool would it be to pull out one of those anchors and stick it in the MDC, because there’s such a connection,” said Sheridan.
“But how do you do that?”
After connecting with the Minister of Culture and Tourism, a marine heritage expert, the Canadian Conservation Institute, and the Save Ontario Shipwrecks organization, Sheridan got the go-ahead to bring the anchor to TISS for some hands-on learning.
Eight months ago, students got to work on restoring the Baldt anchor for the exhibit. Sheridan’s art class got to work scrubbing off the mud and organic matter. It was covered in rust underneath.
A grade 12 chemistry class coated the anchor with a tannic acid solution to protect it, which caused a bubbly reaction right away.
The anchor went from being rusted to a blue-purple colour for a few days, finally landing at the solid black that it is now.
“We brought it back to our classroom, built a tank enclosure around it, and scraped a lot of the river gunk off of it,’ recounted Hayley Jones, a Grade 12 student at TISS.
“This has been really cool. It’s so neat to be able to say that you’re a part of it, and follow it through its whole journey,” she added.
The anchor was lowered into the future site of the Maritime Discovery Centre yesterday afternoon. It is the centre’s first exhibit, and had to be lowered before the roof was put on.
The Maritime Discovery Centre is expected to be completed in 2013.
Several classes at TISS were involved in the project over the past school year.
Sheridan believes that it’s the first time the Canadian Conservation Institute has ever partnered with a high school for a project of this magnitude.
“It’s experiential learning at its best,” said Sheridan.