Amnesty on river treasures – for now 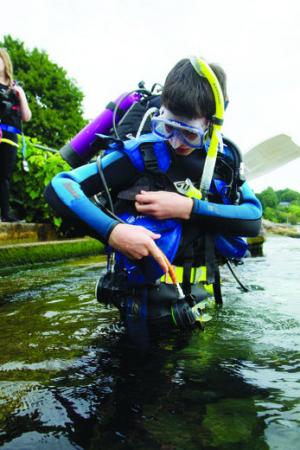 Amnesty on river treasures – for now

Treasure holders, ye be warned: a month’s grace is all ye have.

As of today, provincial rules surrounding the Ontario Heritage Act have been temporarily suspended, for the Brockville Museum and, by extension, the people of the area.

Those who have artifacts taken from the St. Lawrence River may turn them in to the Brockville Museum without being prosecuted under the act.

But they have to do it within a month.

“There’s been the romantic sense of being a treasure seeker. When you’re down there it’s nice to pull things out to prove you were there,” said Dave Sheridan, amnesty chair for Save Ontario Shipwrecks (SOS), Thousand Islands chapter.

“These are the treasures and for the longest time people have prided themselves for finding these.

“But laws are in place against it. The Ontario Heritage Act had a marine clause which protects everything in the water.”

SOS joined forces with the Brockville Museum to seek amnesty from Minister of Tourism, Culture and Sport Michael Chan, who after deep consideration granted what Sheridan believes to be the only amnesty of its kind in the province.

“This is allowing people who have acquired artifacts (from the river) to do the right thing without a threat of prosecution,” Sheridan said. “We’ve been given one month to let this happen. They are literally bending provincial rules for this.”

After formally requesting a year for the amnesty, Minister Chan wrote back that he would allow the amnesty, only if it were limited to a month.

“Divers who recover artifacts from shipwrecks without a licence from the ministry violate the Ontario Heritage Act,” the letter from Chan stated. “To discourage further activities of this kind by shipwreck divers, the ministry requests that the artifacts be transferred soon, and over a one- month period.”

Museum curator Bonnie Burke said Chan’s decision stemmed from not wanting divers to go out now and seek treasure to turn over without being prosecuted.

“Don’t go out, dive and take what you want,” Burke said. “He wants to make sure the people who have these wonderful objects here are able to dispose of them.”

And while everything is being turned over to the Brockville Museum, technically everything will belong to the province, or the people of Ontario as Burke said.

Normally the museum can only accept items of local significance, as per its strict policy. However it recently accepted a rich collection from a man who studied the St. Lawrence River for 50 years. This is a reason, Burke believes, why Minister Chan allowed her to accept the goods.

“The Brockville Museum and other museums have been offered items (taken by divers from the river) but we can’t take them because of the Act and the legality of the Act,” Burke said.

Some of these people, as well as other well-known treasure hunters in the area, are being sent a letter from the Brockville Museum and SOS advising them they may now turn over their finds. These artifacts will help tell the stories of the St. Lawrence.

One story, in which both Burke and Sheridan are interested, involves a treasure hunter who has tried to donate artifacts in the past that could not be accepted.

“Some of the artifacts are very significant,” said Sheridan. “This guy uncovered a story we don’t know.”

The story comes from the beginning of the War of 1812, when two American schooners were surrounded and sunk slightly east of the three Sister Islands in Brockville.

The SOS also just learned the ministry will perform a side- scan sonar survey of this particular area to get photographs.

“When these things come in, they’ll be new stories to share. Christmas is coming early for the Brockville Museum,” Sheridan said.

September 15 marks the end of the amnesty.

The Ontario Heritage Act at a Glance

Under the section of activity on archaeological sites:

No person shall… knowing that a site is a marine or other archaeological site, within the meaning of the regulations, alter the site or remove an artifact or any other physical evidence of past human use or activity from the site.

Every person who… fails to comply with any order, direction or other requirement made under this Act; or contravenes this Act of the regulations… is guilty of an offence and on conviction is liable to a fine of not more than $50,000 or to imprisonment for a term of not more than one year, or to both.